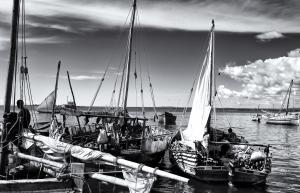 Dhow is the generic name of a number of traditional sailing vessels with one or more masts with lateen sails used in the Red Sea and Indian Ocean region. Some historians claim the dhow was invented by Arabs or Indians, but the majority give the credit to the Chinese. Typically sporting long thin hulls, dhows are trading vessels primarily used to carry heavy items, like fruit, fresh water or merchandise, along the coasts of the Eastern Arabia (Arab states of the Persian Gulf), Pakistan, India, Bangladesh and East Africa. Larger dhows have crews of approximately thirty, smaller ones typically around twelve.

The exact origins of the dhow are lost to history. Most scholars believe that it originated in China between 600 B.C. to 600 A.D[citation needed]. Some claim that the sambuk, a type of dhow, may be derived from the Portuguese caravel.

Even to the present day, dhows make commercial journeys between the Persian Gulf and East Africa using sails as their only means of propulsion. Their cargo is mostly dates and fish to East Africa and mangrove timber to the lands in the Persian Gulf. They often sail south with the monsoon in winter or early spring, and back again to Arabia in late spring or early summer.